Normally, Oze is open between mid-May and late October. A large number of people come to the area during this season.

Oze in early spring (early May) 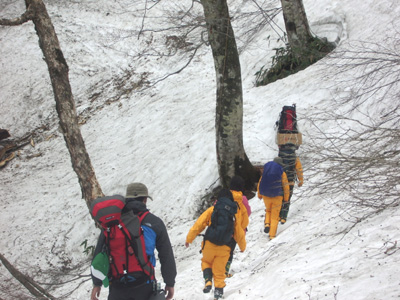 (Heading for Oze over the lingering snow)

Although conditions may be warming up day by day in the world below, early May in Oze still feels like winter. Timing varies from year to year, but snow tends to remain around this season, meaning that visitors must be adequately equipped to come to Oze. Boardwalks are often still under snow cover, and destinations should be reached by following maps, red marks painted on trees and ribbons hanging from branches.

Thawing (mid- to late May) 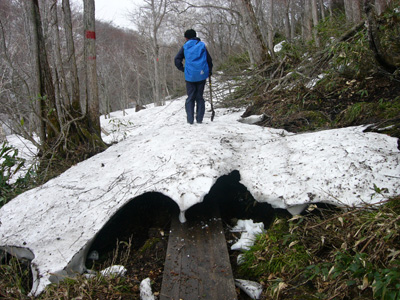 (Walking from the Shirasuna Toge Pass to Miharashi)

The snow starts disappearing in mid-May, partially exposing the boardwalks. The ground between them is still covered with snow that is often hollow inside; it is difficult to walk on, as hiker’s feet sink with every step. 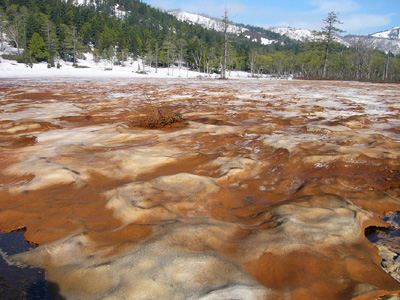 The surface of the snow turns red in the thawing season as if sprinkled with red earth. This mysterious phenomenon can be observed only for a brief period of time before the snow disappears. 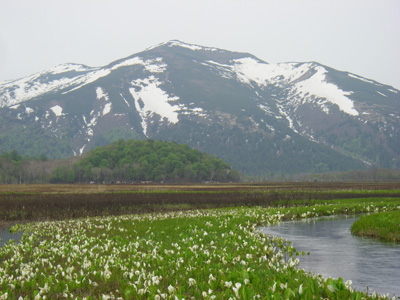 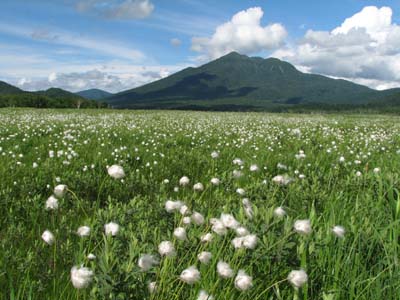 The black flower buds of cotton sedges start appearing in the thawing season, and their small yellow flowers can be seen in June. The blooming ends in July, when the marshes become filled with white fluff from these plants. 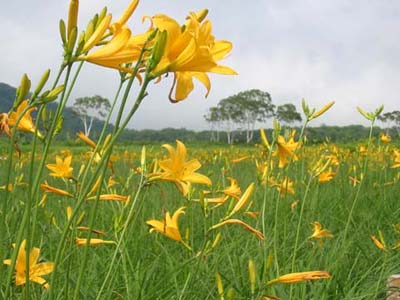 This is the height of Oze’s floral season. After the white fluff of cotton sedges, the marshes become carpeted with the yellow flowers of daylilies. Visitors are usually delighted with summer in Oze. 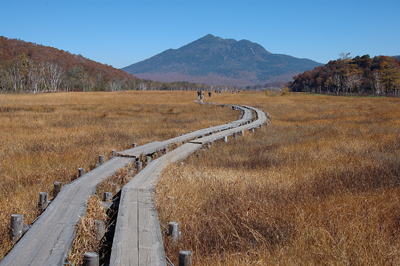 In September, the trees are still covered with green leaves, but the marsh grass starts to turn orange from its tips. Looking at the marsh against the sun makes the whole area seem to shine like gold. Many visitors take pictures of the golden grass swaying in the wind. 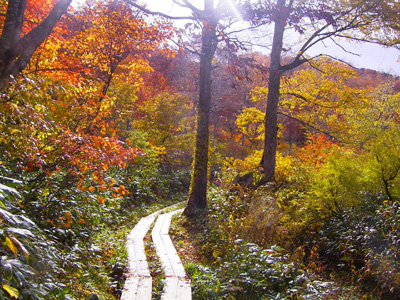 (Walking from Miharashi to the Shirasuna Toge Pass)

In late September, when the orange of the kusamomiji gives way to brown, the leaves on the mountain trees also start to change color. The autumnal hues of beech forests in and around Oze are quite spectacular. The fall colors seem to gradually bleed down the mountains. 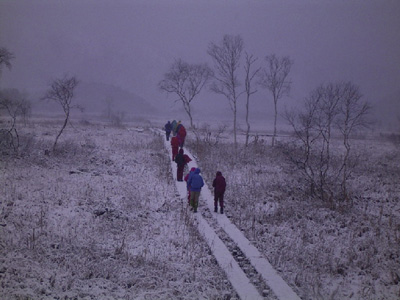 By mid-October, all broad-leaved trees have shed their leaves, and it is time for lodge staff to start packing. Visitors to Oze become scarcer at this time of year, although quite a few still come to enjoy its tranquil atmosphere. The first snow may fall in late October, turning the marshes white. 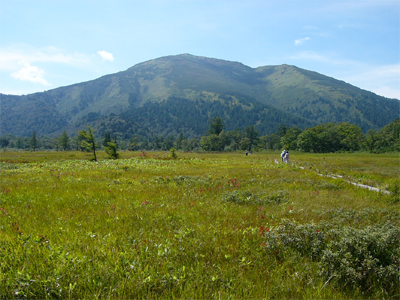 This serpentine-rock mountain has risen over a long, long time, and is home to flowers that cannot be found on other mountains. In the interests of protecting its plant communities, visitors are prohibited from entering the mountain area in early spring between May and June. The east-slope trail that connects Ozegahara and the summit can also be used only for ascent to protect vegetation and prevent accidents. 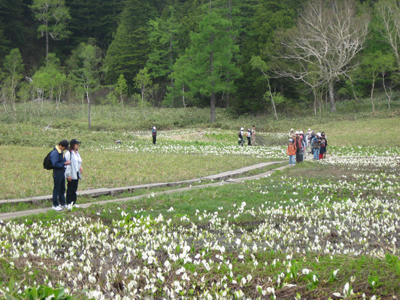 Visitors turning left at Yamanohana will see the Kenkyu-mihon-en (Research Exhibition Garden) spreading out ahead. Despite being called the Exhibition Garden, it is in fact a naturally formed marsh. This section is recommended to those with limited time, as a wide variety of flowers grow there within a relatively small area. The trail to Mt. Shibutsu also starts at the bottom of the garden. 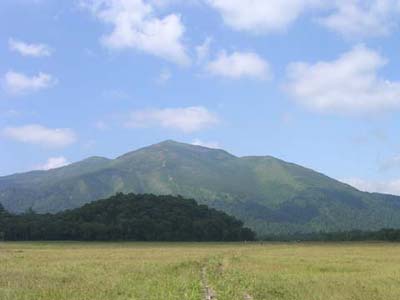 Walking from Yamanohana through Ozegahara Marsh takes hikers to a branch for Ryugu and the Yoppi Bridge. Near the branch, a hill resembling a cow’s neck (ushikubi) rises from the marsh, hence the name of the branch. There are long benches at this branch, and many visitors take a rest there. 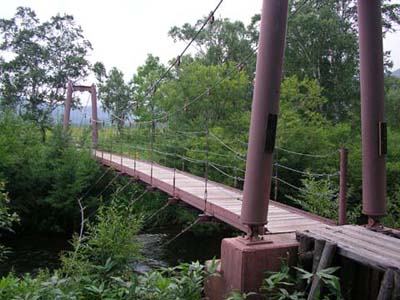 Yoppi is thought to originally have meant, “Where water collects.” The Yoppi River, which flows from the direction of Yamanohana collecting water from several rivers along the way, joins the Nushiri River, which flows from Lake Ozenuma downstream of this bridge, forming the Tadami River and flowing toward Niigata Prefecture. Visitors can enjoy the different faces of Oze along this riverside route. 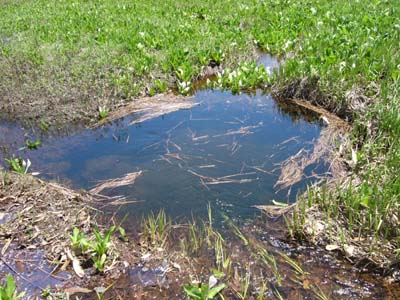 (A river flowing into the marsh)

A river runs into the marsh, becomes an underflow and emerges on the opposite side of the boardwalk. According to Japanese folklore, this underflow tunnel led to Ryugu (a dragon’s palace). Many day-trippers to Ozegahara Marsh have lunch on the benches there before turning back. 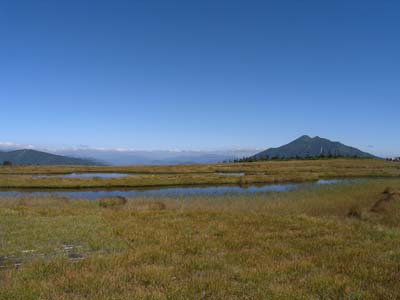 (Viewing mountains across the marsh)

This is a marshland formed at the southern ridge of Ozegahara Marsh. Mt. Hiuchigatake standing across the marsh takes on the appearance of a supernal heaven. Some say this name is derived from a Japanese-language error mistaking bog asphodels for irises (ayame in Japanese). 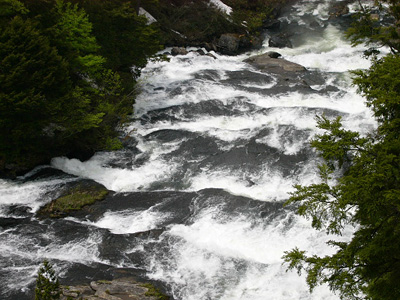 This is a waterfall on the Tadami River, which flows between Niigata and Fukushima Prefectures from the eastern edge of Ozegahara Marsh to the north. From the high viewing place there, the water can be viewed cascading down a series of large rocks. 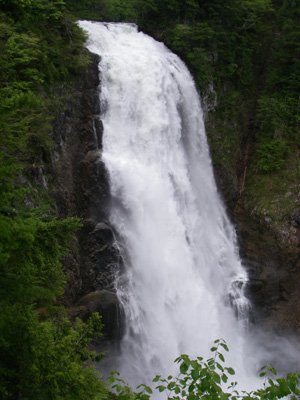 This is a magnificent waterfall located downstream of Hiraname-no Taki Falls, and can be viewed from an viewing platform accessed by descending a little from the trail. All rainfall in Oze passes through the falls, and the tremendous roar of the water there creates a whole new impression of Oze. In the thawing season, the sound of the falls is so loud that people nearby cannot hear each other speak. 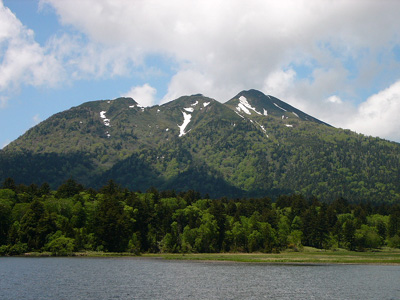 Along with Mt. Shibutsu, Mt. Hiuchigatake is one of Oze’s best-known mountains. It has five peaks formed by a series of eruptions; three of them look out over Lake Ozenuma and Ozegahara Marsh. Lake Ozenuma, another sightseeing spot, was formed at the foot of Mt. Hiuchigatake when an eruption of the mountain blocked the flow of the Nushiri River. The marshes on the north shore of the lake, both large and small, provide fantastic views to hikers. 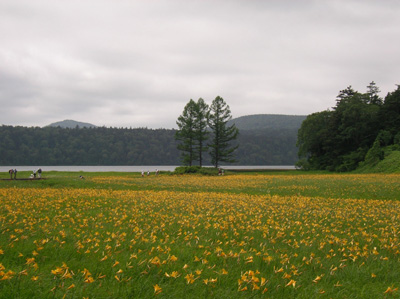 (Oe Marsh and The Three Larches)

This is the largest marsh around Lake Ozenuma. The route from the Numayama Toge Pass to the eastern shore (where the Ozenuma Visitor Center is located) runs through this wetland. Visitors will see three stands of larches on some slightly elevated land beside Lake Ozenuma, which people affectionately call “The Three Larches.” In the late-July daylily season, this marsh turns yellow. 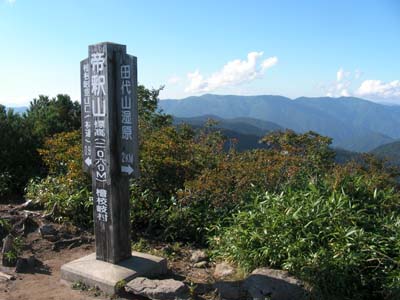 This is one of the areas that has been newly incorporated into the national park. The mountain’s 2,060-m peak affords excellent views of Mt. Hiuchigatake and Mt. Aizu-komagatake as well as Mt. Nikko-Shirane and Mt. Nantai in the distance. The area is also well known for its colonies of “Osabagusa” (poppy family) at the Umasaka Toge Pass access point. 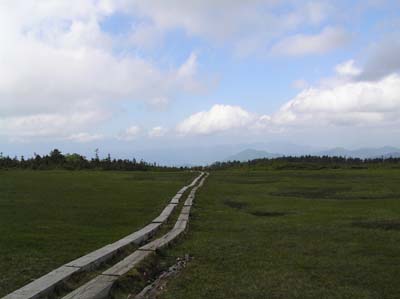 (Viewing mountains across the Tashiroyama Marsh)

The large marsh here sits on a slightly eastward-inclined area that does not look like a mountain summit. Mt. Aizu-komagatake and other mountains can be seen across the marsh. *The boardwalk on the Tashiroyama Marsh is one-way. Please walk in a counterclockwise direction. 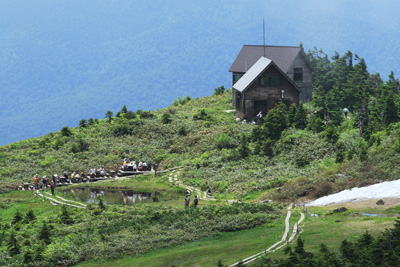 Moving on past the forest line, hikers will suddenly see a tilting summit wetland spreading out ahead. The summit located across the marsh commands views of Mt. Hiuchigatake and Mt. Shibutsu. This marsh is also well known for its “Hakusan Kozakura” (primrose family), which bloom between early and mid-July. 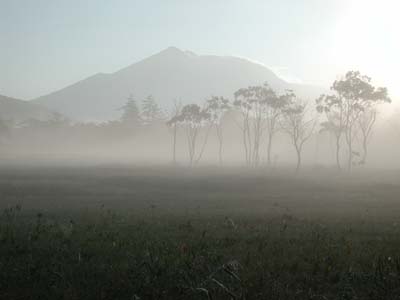 (Ozegahara early in the morning)

In water-rich Oze, the ground undergoes radiative cooling in the morning and late afternoon, often generating mist near the ground surface. Early risers will have the chance to see the fantastic sight of mountains appearing to float on the mist-covered marshes. The mist gradually disappears as the sun rises. 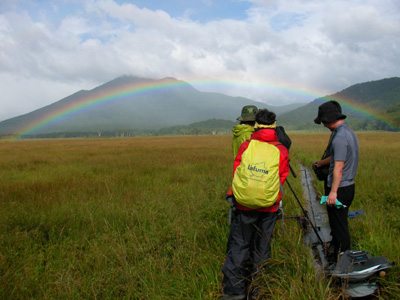 (A beautiful rainbow in Ozegahara)

In summer, thundershowers are a frequent occurrence in Oze. In the early afternoon, giant cumulonimbus clouds develop in the sky, and distant rolls of thunder can be heard. Within an hour or so, the sky darkens and large drops of rain start to fall, prompting people to hastily take out their raincoats. After these heavy-but-brief downpours, it starts to brighten and beautiful rainbows often appear. 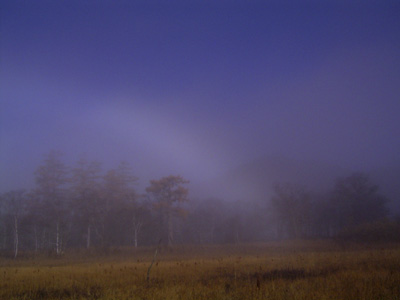 (A white rainbow over Ozegahara)

In Oze, vapor from the marshes often undergoes morning radiative cooling. This generates mist, which can look like a white rainbow when the sun shines on it. Large water drops like those found in rain diffract light in the seven colors of the rainbow, but small water drops such as those in mist do not completely diffract light, producing the appearance of a white rainbow.