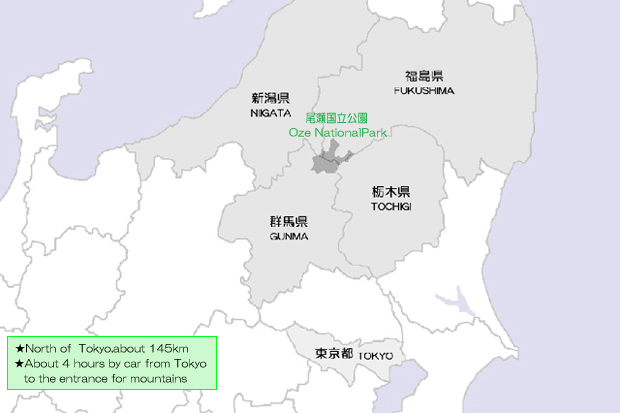 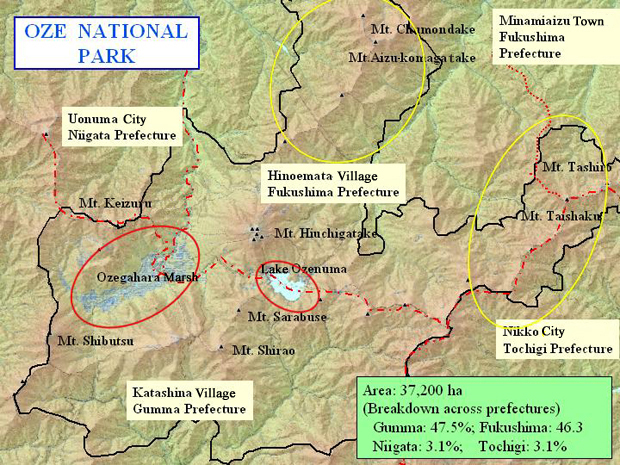 Situated in the center of Japan, Oze is the largest highland marshland on Japan’s main island of Honshu. Spanning Gunma, Fukushima, Niigata and Tochigi prefectures, it is home to the Ozegahara Marsh, Lake Ozenuma and the surrounding 2,000-m-class mountains, including Mt. Shibutsu and Mt. Hiuchigatake. Here, visitors can enjoy varied, beautiful natural landscapes, including vast marshlands, lakes, alpine areas, pristine forests and high waterfalls.
The climate is relatively cold with cool summers and snowy winters (total snowfall: 4 m). In the marshes, many marsh plants, such as skunk cabbages and daylilies, bloom between spring and autumn. Oze also provides habitats for a wide variety of wildlife, including large mammals, birds and insects. The number of rare animal and plant species in the region is abundant, making it an academically important area.
To strictly preserve this precious and fragile environment, Oze’s marshes have been designated as Special Protection Zones of Oze National Park as well as a Special Natural Monument.
In the past, Oze faced an environmental crisis caused by the trampling of its marshes by visitors and other factors. However, thanks to tireless conservation efforts by many, the environment has now been restored. Oze is also the birthplace of Japan’s take-garbage-home movement, making it a symbolic place of nature conservation.
In spring and summer, many people visit Oze to enjoy its rich natural environment. It is the ideal place to reflect on the relationship between nature and mankind.

Until several million years ago, Oze was a flat highland formed on the ancient Hinoemata Stratum and granite. A shallow valley ran toward the northeast, and a serpentine-rock mountain, which would later become Mt. Shibutsusan, was in the process of formation at the western edge.

Volcanic activity in the area began in the Pliocene epoch (5.33 million to 2.59 million years ago). The first to erupt was Mt. Keizuru, which has a rocky protruding peak apparently formed by lava. However, much of the lava has now been eroded, leaving behind only the hard core. Lava from Mt. Keizuru still remains at its foot as well as covering half the slope of Ayamedaira Marsh, located to the south of Ozegahara Marsh. This indicates that lava flowed in the area but much of it was eroded away. A giant rock (Kawagoiwa) near Ryugu-goya Lodge is made of this lava.

In the Pleistocene epoch (2.59 million to 10,000 years ago), volcanic activity became more pronounced. In the areas north and east (Mt. Hinokitaka) of Lake Ozenuma, Ayamedaira Marsh, Mt. Susugamine, Mt. Sarabuse and other volcanoes probably erupted one after another. The lava discharged by these mountains had low viscosity, resulting in shallow-sloping shield volcano formation. Mt. Sarabuse viewed from Lake Ozenuma shows the characteristic form of a shield volcano.

In this way, the topography of Oze was gradually formed, and the eruptions of Mt. Hiuchigatake, Oze’s last volcanic activity, made the area as it is today. It is not clear when Mt. Hiuchigatake started erupting, but it was probably in the Pleistocene epoch (some 300,000 years ago). The mountain’s current shape is the result of a series of eruptions and lava outflows. Its relative newness as a volcano means that few studies have been conducted on its appearance.

By this time, the lava from Mt. Keizuru in what is now Ozegahara Marsh had been washed away by the Nushiri and Nekomata rivers (tributaries of the Tadami River), creating the relatively flat, semi-basin shape we see today. The lava that flowed from Mt. Hiuchigatake blocked the Tadami River near Onsen-goya Lodge and Sanjo-no Taki Falls. It was once believed that a huge 200-m-deep lake called Ko-ozegaharako (Old Ozegahara Marsh) covered the whole of the Ozegahara area. However, studies have found no evidence of this. It is now clear that a shallow lake submerging the eastern half of Ozegahara Marsh existed around 16,000 years ago.

The lava that flowed from Mt. Hiuchigatake buried the Nushiri River, forming Lake Ozenuma. This occurred in the last stage of the mountain’s volcanic activity.

* Recent studies have also suggested that the Nushiri River was not blocked by lava flow but by the large-scale debris avalanche of Mt. Hiuchigatake’s southern slope.

Thick peat is deposited in Ozegahara.

In the area now known as Ozegahara Marsh, mudflows from Mt. Hiuchigatake and other surrounding mountains formed a gentle alluvial fan, and meandering rivers there frequently caused flooding. The shallow lake was buried at this time. Peat formation began in oxbow lakes (formed when meandering parts of rivers become separated from the main flow) and backswamps (formed by flooded rivers not returning to their original state) probably around 8,000 years ago. Boring surveys have shown that the depth of the peat layer in Ozegahara Marsh was over 4.5 m. This depth would probably be less than 5 m in most parts.

*The deposition rate of peat in Oze is approximately 0.7 ? 0.8 mm a year, although this varies by climatic conditions, source plants and the extent of degradation. This means that it takes more than 10 years to restore 1 cm of depression caused by the passage of hikers.

Area across the prefectures/zones of Oze National Park

On August 30, 2007, Oze (home to the largest wetland area in Japan’s mainland of Honshu) and surrounding areas with outstanding natural environments as evidenced by the presence of Abies mariesii forests and alpine wetlands, including Mt. Aizu-komagatake, Mt. Tashiro and Mt. Taishaku were designated collectively to form Oze National Park. This was the first national park designation of the past 20 years since that of Kushiro Shitsugen National Park in July 1987. There are currently 29 national parks in Japan.

Various rare animals and plants inhabit Oze due to the particular and varied conditions of weather, geography, and geology.

Oze has been designated as a national Special Natural Monument. It has high academic value, and its preservation is of paramount importance.
Even small changes can affect the whole of the Oze area. To protect the region’s ecosystem, it is imperative that the current environment remain unchanged.